To celebrate its 50th anniversary, Kentucky Humanities, in partnership with the Bluegrass Music Hall of Fame & Museum, will host the Father of New Grass, Sam Bush and Woodsong’s Old-Time Radio Hour host, Michael Johnathon who will discuss storytelling through song and the impact of music on a particular region, the Commonwealth, and the country at large.

Sam Bush, a native of Bowling Green, Kentucky, is an American mandolinist who is considered an originator of progressive bluegrass music, known as New Grass. In 2020, he was inducted into the International Bluegrass Music Hall of Fame as a member of New Grass Revival. He is a multi-award-winning musician including Hall of Fame inductions, Grammy Awards, and the moniker “King of Telluride” for his longstanding association with the Telluride Bluegrass Festival.

Michael Johnathon, creator and host of the PBS syndicated Woodsong’s Old-Time Radio Hour since its inception in 1999, is an American folk singer-songwriter, producer, author, and playwright. He has released 17 albums, published four books, a play, composed an opera, and performs with symphony orchestras and in coffeehouses alike.

This event is a collaboration between Kentucky Humanities and the Blue Grass Music Hall of Fame and Museum. 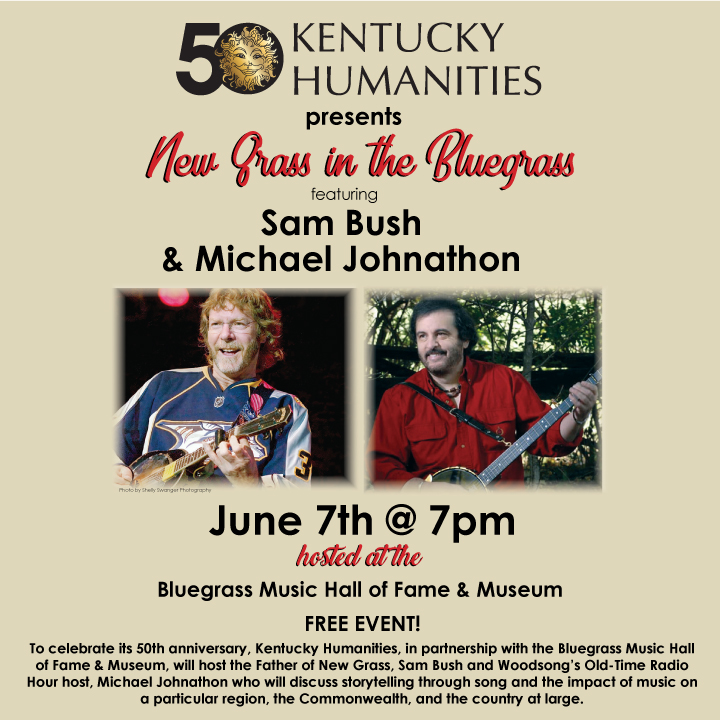