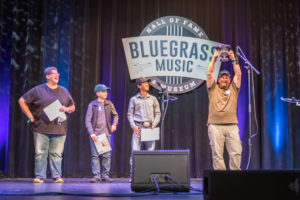 The Kentucky State Fiddle Championship will take place March 18th, 2023 at the Bluegrass Music Hall of Fame & Museum in Owensboro, Ky.  More info for this year's contest can be found here.

The Kentucky State Championship Old Time Fiddler’s Contest has a new home at the Bluegrass Music Hall of Fame & Museum in downtown Owensboro, Kentucky, and 2021 marked the beginning of the next chapter in this historic contest.  The Hall of Fame takes pride in presenting music that matters, music that is rooted in the heritage and the culture of the Commonwealth of Kentucky.  As a music-centric cultural center, we celebrate the music and the stories behind the music.  This is event has a rich history and a great story.

The original Kentucky State Championship Old Time Fiddler's Contest was the brainchild of Jodie Hall. Hall was born in Hardin County but a long-time resident of Leitchfield in Grayson County. He was a monument salesman by trade, and through his friendship with Bill Monroe created the grave monument for Pendleton Vandiver, Bill Monroe’s “Uncle Pen”. He was also an instrument repairer, storyteller and musician.

His inspiration for creating a contest came from attending the Tennessee Valley Old-Time Fiddlers Convention in Athens, AL in the early 1970’s. With his love of music and a desire to support and perpetuate fiddle and old-time music, he started a fiddle contest held on July 4, 1974 at the fairgrounds in Leitchfield.  He was assisted by his friend Leo Mudd. Leo Mudd was a Kentucky State Police Officer, public speaker, author, and former United States Marine who would serve as the main emcee of the event.

After the success of this first event, Jodie and Leo traveled to the state capital at Frankfort and met with Governor John Y. Brown, who issued a proclamation in 1975 naming this event the Official Kentucky State Championship in fiddle, clogging, harmonica, banjo, flat-top guitar, and all acoustic stringed-instrument categories (except  dulcimer).

As the new State Championship, the event was set to be held the 3rd Saturday of every July and moved to Rough River Dam State Resort Park. The Governor’s Cup trophy, a silver bowl, was awarded each year to the new Kentucky State Champion. Both the contest and the award became one of the marquee titles in the entire Southeastern US and drew contestants from all over the US, Canada, and other countries.

In 2012, the contest took a pause for a year and moved to a new venue and continued through 2014. The caretakers of the event then worked collaboratively with the Bluegrass Music Hall of Fame & Museum in Owensboro, Kentucky to fold the fiddle contest into the broader work and programming of the Hall of Fame. 2021 marked the return of the Official Kentucky State Championship at its new home at the Hall of Fame in Owensboro. With a new updated format and greater emphasis on fiddling, the event is expected to once again evolved into one of the major competitions in the Southeastern US.

LEARN MORE ABOUT THE CHAMPIONSHIP