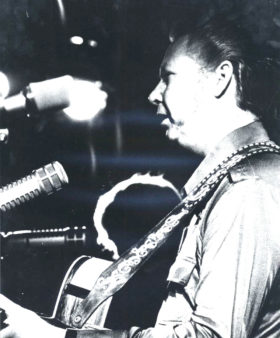 Year Inducted: 2005 Born: February 12, 1930 in Pigeon Roost, Kentucky, United States Died: April 3, 1993 in Dayton, Ohio, United States Primary Instrument: Guitar
“We’d work four nights a week, $8 a night for each man, and some places it would be so rough you would have a couple or three shootings or cuttings a night.”
Tom Teepen in “Allen Grass: A Family Affair,” Muleskinner News, February, 1973.

He developed an interest in making music at age 17 when he got a guitar. It was probably not a coincidence that this occurred as Red was hearing Bill Monroe, with Lester Flatt and Earl Scruggs, on the Opry. By the latter part of 1951, he had progressed to the point that he was making appearances on the Kentucky Barn Dance in Lexington, as a guest with established artists such as the Stanley Brothers, Flatt & Scruggs, and Jim & Jesse.

In 1952, Red relocated to Dayton, Ohio, and formed a trio with Frank Wakefield on mandolin and Noah Crase on banjo. This group, the Blue Mountain Boys, appeared at various bars in the area, working four nights a week for $8.00 apiece. It was while he was in Dayton that Red made his first recordings, cutting six songs for the Kentucky label of Cincinnati. These were mostly covers of recently popular gospel songs such as “The White Dove” and “The Boat of Love.” Also included was his rendering of “Paul and Silas,” a spiritual that was later recorded by Carl Story, the Stanley Brothers, and Flatt & Scruggs.

When Noah Crase left to play with Bill Monroe in 1954, one of his replacements was a 17-year-old Sonny Osborne. Due to his age, he wasn’t able to play in the bars with Red, but he did help out with radio shows and some show dates. Sonny’s stay was brief, but it did foreshadow one of the most important phases of Red’s career, his pairing with Bob and Sonny Osborne. Less than two years later, the three were playing together, along with fiddler Art Stamper, at a Dayton nightspot called the Friendly Inn.

In 1956, the group signed a recording contract with MGM, as the Osborne Brothers & Red Allen. Over the next two years, they recorded 16 songs for the label, all of which stand as some of the best 1950s bluegrass ever recorded. Bob Artis, in his book Bluegrass, noted of Red’s singing at this time: “Red had more power and range to his voice than anyone, and his trios with the Osborne Brothers were some of the best ever… Almost overnight the Osborne Brothers and Red Allen shifted the bluegrass vocal emphasis from the duet to the trio.” Several of the later MGM selections featured an innovative trio style that sported Bobby’s high lead vocals, with Sonny’s baritone directly under it. Red supplied an even lower harmony part. The recordings led to the group’s joining the WWVA Jamboree in Wheeling, West Virginia. Their broadcasts did much to popularize the group throughout the northeast and inspired a host of young players, most notably the fledgling Country Gentlemen.

Red parted with the Osborne Brothers in the middle of 1958. The next year and a half was a period of relative musical inactivity. In 1959, Red and his first wife divorced and not long afterwards he relocated to the Washington, D. C., area. In 1960, he teamed up again with Frank Wakefield and formed the Kentuckians. Other members included Bill Emerson on banjo and Tom Morgan on bass. Personnel changed from time to time and included banjoists Porter Church, Robbie Robinson, Bill Keith, and Pete Kuykendall, fiddler Richard Greene, mandolin players David Grisman and Wayne Yates, and bass players Bill Yates and Jerry McCoury. Performance highlights during this era included regular appearances on the WWVA Jamboree and a September 21, 1963 show at Carnegie Hall.

Red recorded some of the best music of his career during his years in Washington in the early and middle1960s. There was a six-song session for Starday in November of 1962 that featured him and Frank Wakefield with Don Reno on banjo, Chubby Wise on fiddle, and Junior Huskey on bass. There were several sessions for Rebel, one of which included a memorable arrangement of “Little Birdie.” Another contained classics such as a cover of Bill Monroe’s “Close By” and “Keep On Going,” with some fiery fiddle by Scotty Stoneman.

In addition to the singles, four albums were done during this same period. The first of these was the excellent Allen-Wakefield collection that was called simply, Bluegrass (Folkways 2408). Recorded in the fall of 1963 and spring of 1964, supporting members included banjoists Bill Keith and Pete Kuykendall and bass players Tom Morgan and Fred Weisz. By January of 1965, Frank Wakefield had moved on to the Greenbriar Boys and a new group, consisting of banjoist Bill Emerson, mandolin player Wayne Yates, and bass player Bill Yates, recorded an album for Dick Spottswood’s Melodeon label. The album was titled, much to Allen’s chagrin (his name was absent from the album title), The Solid Bluegrass Sounds of the Kentuckians (Melodeon 7325). In December of 1965 and September of 1966, two albums were recorded for the County label, Bluegrass Country (County 704) and Red Allen and the Kentuckians (County 710). Both albums were produced by an up-and-coming mandolin player named David Grisman. Personnel over the two sessions included Porter Church on banjo, Richard Greene on fiddle, Wayne Yates and/or David Grisman on mandolin, Bill Yates and/or Jerry McCoury on bass, and Craig Wingfield on dobro.

Not only was Red Allen a consummate bluegrass vocalist, he was an engaging master of ceremonies who kept his performances lively and entertaining. Fred Bartenstein noted, “Red’s legendary sense of humor and tendency to say the most outrageous things onstage and on the air caused not a few broadcasters to ride the ‘bleep button’ when Red was at the mic!”

Red ended his tenure in the Washington area and moved to Nashville in 1967 to substitute for Lester Flatt, who was convalescing from a heart attack. For a brief period of time, he was a member of the famous Flatt & Scruggs show. When Lester returned, he went on to work as a solo, appearing on various bluegrass festivals. His last significant work of the 1960s was a stint in 1968 with J. D. Crowe, Doyle Lawson, and Bobby Slone as the Kentucky Mountain Boys at the Holiday Inn in Lexington, Kentucky. They recorded one album together, Bluegrass Holiday, for Lemco, later reissued by Rebel under J.D. Crowe’s name.

In the early 1970s, Red began working with his sons – Neal, Greg, Harley, and Ronnie – in a combination that was labeled Allengrass. An album under that title was recorded for the Lemco label. Several additional albums were done for King Bluegrass under Red’s name over a two-year period. With this group, Red renewed his association with the WWVA Jamboree. In contrast to the ultra-traditional groups Red fronted in the past, working with his sons – long hair and all – pushed him in new directions, and bluegrass classics gave way to more contemporary fare such as Credence Clearwater Revival’s “Proud Mary.” Tragically, this era of Red’s career was cut short with the untimely passing of his son, Neal, in 1973, from pneumonia. This, coupled with Red’s open heart surgery in 1976, greatly curtailed his musical activities.

Red continued to make occasional recordings, mostly for the Folkways label. One noteworthy release from this era was the Grammy-nominated David Grisman collection called Bluegrass Reunion, featuring Red, Jim Buchanan, Herb Pedersen, Jerry Garcia, and others. Aside from this, he spent his last few years out of the entertainment spotlight except for occasional appearances at clubs in Dayton. A heart condition that he had since he was a child was taking its toll. But, it was complications from lung cancer that eventually took his life, in 1993, and forever silenced one of the greatest voices in bluegrass. Despite the length of his service and his immeasurable talent, Red Allen has never achieved the acclaim of other first-generation pickers and singers. But he was a solid and dependable trouper who proudly proclaimed the bluegrass banner. Happily, much of his best recorded work has been reissued in recent years in a series of meticulously produced CDs, affording old fans and new converts alike a chance to enjoy and appreciate his artistry. 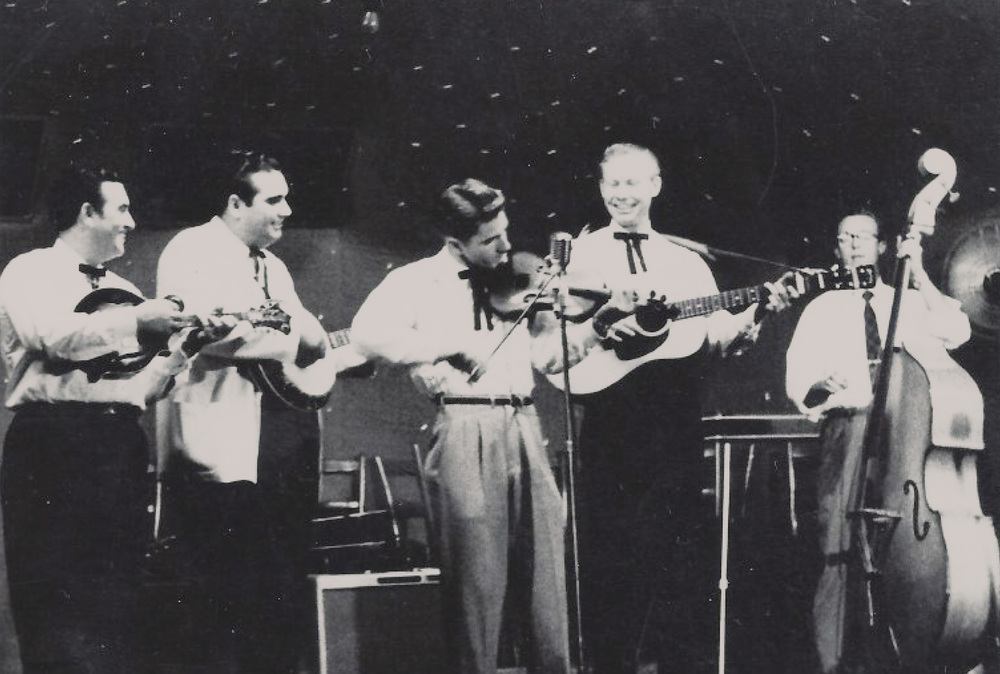 From the Archives: The Osborne Brothers with Red Allen. Donated by Roger Sprung. 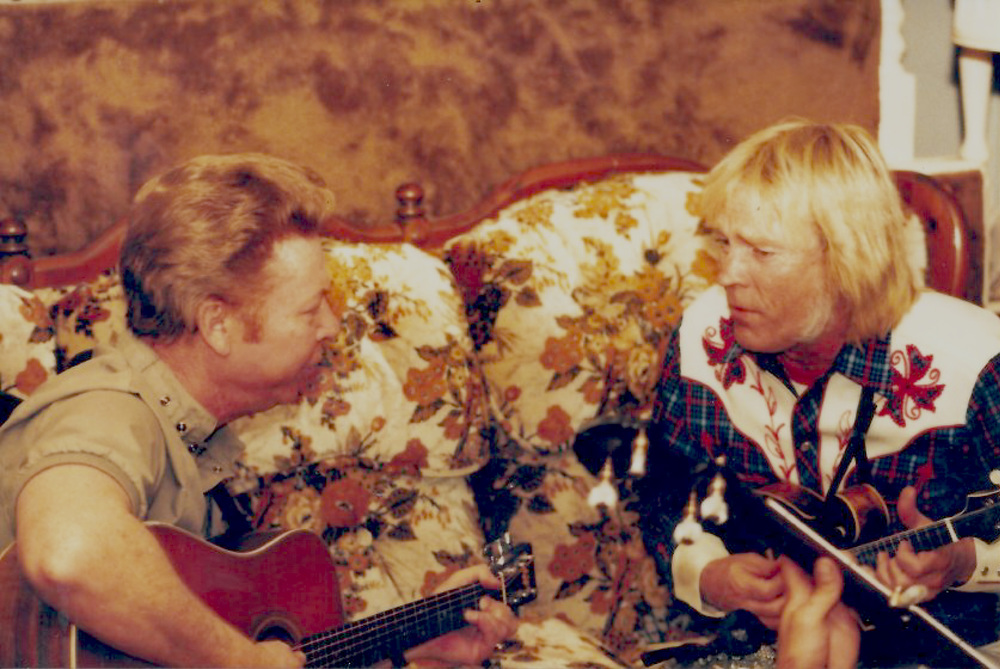 “Allen was about to embark on an astonishing four-year burst of creativity and recording activity that would forever anchor his reputation as one of the most intense, hard-edged and soulful lead singers in the annals of bluegrass.”
Jon Hartley Fox, in liner notes to Red Allen: Keep on Going, The Rebel & Melodeon Recordings, Rebel 1127, 2004.
“I can’t play and sing with any person I don’t like, I don’t care how good they are. I’ve got to like a man first. Being a good man is as important as being a good picker and singer.”
Marty Godbey in “A Conversation with Red Allen,” Bluegrass Unlimited, June, 1979.
“My whole world changed when I lost my son, when Neal went away. That changed my whole outlook on life, and all of a sudden, music… You miss your kids when you’re out on the road. You just don’t live a normal life. But when we lost Neal, there was other things more important to me than picking, singing, and making a dollar.”
Glenna H. Fisher in “Red Allen: Bluegrass From the Man Who’s Been There,” Bluegrass Unlimited, January, 1984