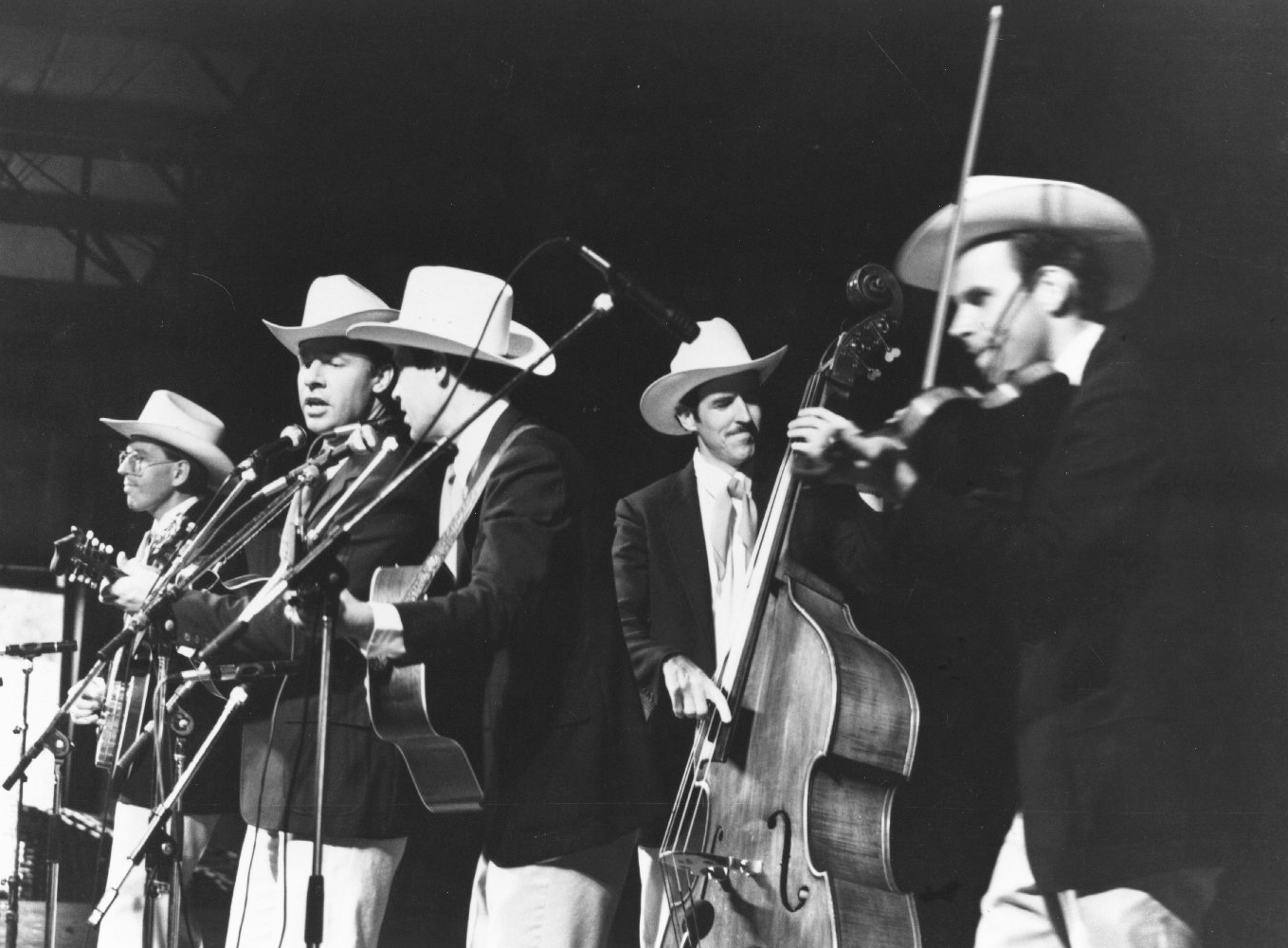 The Johnson Mountain Boys were a dynamic, high-energy bluegrass band. They didn’t just walk on stage . . .  they ran! They burst on the scene – literally – in the late 1970s and early ‘80s and were unique in that they modeled themselves after the music’s forebears. This was in sharp contrast to contemporary/progressive trends of the day. They breathed new life into the artform by energizing overlooked gems from the past. But they weren’t just a retro band. They put together new material that blended seamlessly with their cover songs. With an engaging stage show that included western style hats and ties and matching suits, they were a commanding presence.

The Maryland-based group got its start in 1975 when banjo player Dudley Connell teamed up with guitarist Ron Welch. Songs of the Stanley Brothers – their idols – made up the bulk of their repertoire. They called themselves the Johnson Boys, in deference to a band that Connell’s father played in previously. When the duo discovered that there was another band with the same name, they added the word mountain.

The duet soon grew to a trio, quartet, and quintet. Pickers from the Maryland suburbs and Washington, DC, fleshed out the band. Eddie D’Zmura, a Gaithersburg High School chum of Dudley’s, was added on mandolin. Gary Reid, a Silver Spring native who connected with Connell at a Ralph Stanley festival, teamed up on bass. At some point, Ron Welch dropped out and Dudley switched from banjo to guitar and lead vocals; Rockville picker Francis “Frannie” Davidson took over the banjo chores. Completing the early line-up was DC native David McLaughlin, who signed on to play fiddle. The fledgling band honed its talents by appearing at open mics throughout the area and soon graduated to playing restaurants and clubs throughout the Washington metro area.

In June 1978, Reid was replaced by Bethesda, Maryland, musician Mark Prindle on bass. The following October, Reid launched Copper Creek Records and produced the debut recordings by the band, a 45-rpm disc featuring Connell’s first original composition on record, “When I Can Forget,” and the Connell-D’Zmura instrumental “Johnson Mountain Hoedown.”

In the fall of 1978, David McLaughlin departed for college and was replaced by Gaithersburg native Eddie Stubbs. The sixteen-year-old high school senior limited his playing to weekends until graduation the following May. One of Stubbs’ first gigs with the band as a full-time member was the June 1979 Indian Springs Bluegrass Festival. It was also the band’s first festival booking.

Two more personnel changes came in the summer of 1979. Seabrook, Maryland, denizen Richard Underwood, an alumnus of Buzz Busby’s Bayou Boys, replaced Frannie Davidson on banjo and Montgomery Countian Larry Robbins replaced Mark Prindle on bass. It was this line-up (Connell, Underwood, Stubbs, D’Zmura, and Robbins) that remained fairly constant for most of the early and middle 1980s.

At the start of the 1980s, things began to click. They made a return to the Indian Springs festival where they received two encores and three standing ovations. Although this put the festival schedule behind, the evening’s master of ceremonies, WAMU disc jockey Gary Henderson, proclaimed “Thank God for the Johnson Mountain Boys.”

The group’s debut album for Rounder Records – the self-titled The Johnson Mountain Boys – was released in April 1981 and was well received. Material was evenly split between band originals and deftly chosen relics from the yesteryears of bluegrass. Bluegrass Unlimited columnist Walt Saunders, an early supporter of the group, provided comprehensive liner notes that traced the band’s history to the present. His magazine gave the album a highlight review and praised the group for its “driving instrumentation, some of the most soulful singing ever heard in the music, strong rhythm, tight harmonies and a remarkable stage presence . . . Instrumentally, there are no modern junk licks on this LP; these guys play slambang bluegrass. Period.”

Between club work and a growing list of festival bookings, the band was averaging 150 dates per year. It was a busy schedule and that necessitated one personnel change; Eddie D’Zmura departed and David McLaughlin returned to play mandolin. With his vintage Lloyd Loar instrument in hand, David had developed into a solid Monroe-style player and added greatly to the band’s sound.

The band averaged one new album a year with Rounder. Walls of Time was released – in three different formats: long-play album, cassette tape, and 8-track cartridge – in 1982 and Working Close followed in 1983. In his December 1983 review in Bluegrass Unlimited magazine, Jon Hartley Fox noted of Working Close that it’s the “third JMB album and it is far and away the best . . . These guys have a knack for digging up great, but seldom performed, old songs as well as writing their own sparkling material . . . If such an award existed, Working Close would be my nominee for best bluegrass album of the year.”

The Working Close album coincided with the band’s signing with the Lancer Agency. The firm was founded by Lance LeRoy, a former manager of Lester Flatt. LeRoy had a deep appreciation for the history of the music and knew the ins and outs of the business. He worked tirelessly to increase the band’s profile and to get them booked into bigger and better venues. Eventually these included the White House, Madison Square Garden, Lincoln Center for the Performing Arts, and the Grand Ole Opry.

The group’s first overseas performances came in 1984 when they participated in a month-long United States Information Agency tour of Africa. Concerts and workshops took place at embassies in Zimbabwe, Mozambique, Rwanda, Burundi, Kenya, and Tanzania. Three years later, they journeyed to England for the Edale Bluegrass Festival. Other tours also took the group to China, India, and Burma.

In the early part of 1985, the group downsized their mode of transportation from a bus to a van. Space became a premium and the decision was made to eliminate their trademark cowboy hats. Fans took up a petition to see them reinstated and after two years the hats came back.

Richard Underwood recorded one final album with the group before departing in October 1986: Let the Whole World Talk. The title track, a J. D. Miller song originally recorded by Jimmy C. Newman in 1956, proved to be a breakthrough song for the group. In his notes to the group’s At the Old Schoolhouse album, columnist Bill Vernon noted that “there was no conscious commercial calculation involved, but once the group had recorded the song, with its inspired twin fiddling by Eddie Stubbs and David McLaughlin, and Dudley Connell’s soaring vocal, they knew they had hit on something new and different . . . People who had not previously especially liked bluegrass music took a second listen on the strength of the song, and radio stations that played little or no bluegrass added ‘Let the Whole World Talk’ to their playlists.” The album also introduced bass player Marshall Wilborn.

Underwood’s replacement was Gettysburg, Pennsylvania, banjoist Tom Adams, who had recently left Jimmy Martin’s band. Despite a flawless transition to the Johnson Mountain Boys, his tenure was brief. On February 20, 1988, the group played what was billed as their farewell performance. Even with critical acclaim and a busy touring schedule, the group called it quits, citing the inability of the five bandmembers to earn a decent wage. The show was held at the Lucketts Community Center in Lucketts, Virginia. Rounder recorded the event and released a double-LP set called At the Old Schoolhouse. The album was nominated for a Grammy and received the International Bluegrass Music Association’s nod for Album of the Year.

Retirement was short-lived and the foursome of Connell-McLaughlin-Stubbs-Adams plus bass player Earl Yeager regrouped with the stated purpose of working twenty-five to thirty dates per year, down drastically from their previous schedule of 200 plus dates. This period saw the release of the Grammy-nominated Blue Diamond. The final breakup for the band came in November 1996 at a festival in Myrtle Beach, Georgia.

Gary Reid is a bluegrass music historian, journalist, and producer, based in Roanoke, Virginia.

BMI’s database credits various members of the Johnson Mountain Boys with 124 published compositions and arrangements, including:

“Goodbye to the Blues”

“Mother’s Voice is in the Wind”

“When I Can Forget” 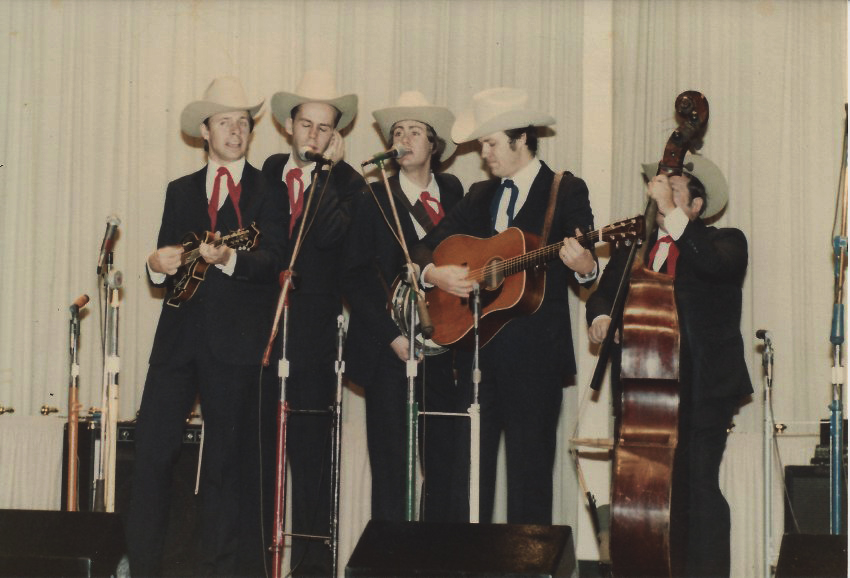 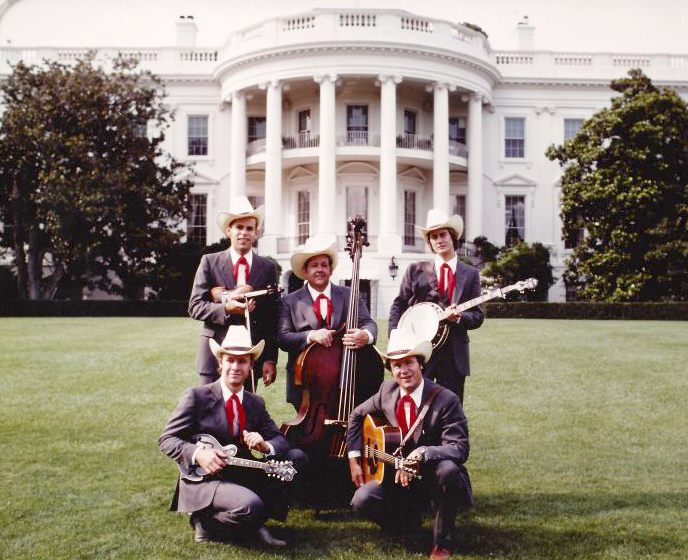 “You couldn’t find a more diverse group of people. [But] we all really listened to the same kind of music, and had been influenced by the same people. It was really a charged atmosphere when we got together, because everybody was learning new things for the first time . . . hearing old, old records that were new to us—it was really an exciting time.”
Dudley Connell, quoted by Bill Vernon in liner notes to The Johnson Mountain Boys Live at the Old Schoolhouse (Rounder Records, 1989).
“It was really hard to believe. I remember when the first [Johnson Mountain Boys] Rounder record was reviewed in the Washington Post and the writer compared it to landmark albums like J. D. Crowe & the New South or albums by the Seldom Scene. Obviously, those were bands that we had looked up to a great deal. And still do! It was a shock, but it was a pleasant shock.”
Richard Underwood, quoted by Steve Romanoski in “Johnson Mountain Boys: In the Neo-Tradition,” Option, May/June 1986.
“In numerous ways, my days with the Johnson Mountain Boys groomed me for what I’m doing today, work a lot of long hours, and I couldn’t do what I do had it not been for those days in the 1980’s. Performing music in a traveling band allows one to build incredible stamina . . . to keep going even if you’re tired.”
Eddie Stubbs, quoted by Rick Lang in “The Johnson Mountain Boys – A Nostalgic Look,” 2006 Bluegrass Guide, 2006.