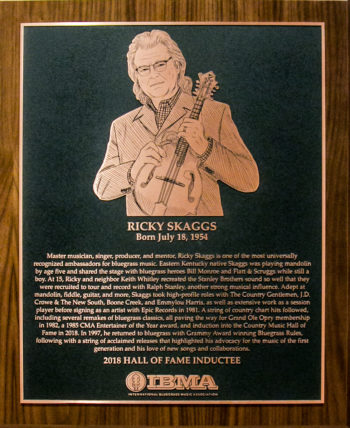 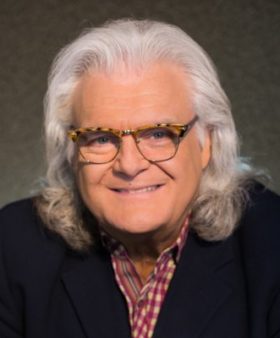 Year Inducted: 2018 Born: July 18, 1954 in Louisa, Kentucky, United States Primary Instrument: Mandolin
“That was a homerun for me . . .I had a great opportunity to try to bring bluegrass to the mainstream marketplace of the music industry by doing the things that I did.”
Quoted by Bill Conger in “Ricky Skaggs–Stays True to Himself with Music to My Ears,” Bluegrass Unlimited, May 2013.

Ricky Skaggs has led a storied life in music that included childhood guest appearances with Bill Monroe, Flatt and Scruggs, and the Stanley Brothers; apprenticeships with Ralph Stanley and the Country Gentlemen; spots in classic configurations of bands headed by J.D. Crowe and Emmylou Harris; status as a mainstream country music star and finally as a headliner/elder statesman for bluegrass.

He was born into a musical family on July 18, 1954, in Louisa, Kentucky. His father, Hobert, played guitar and was a fan of bluegrass while his mother, Dorothy, enjoyed singing and composing songs. Mrs. Skaggs would oftentimes sing while doing chores around the house and Ricky, starting at age three, would sing harmony. Church provided another forum for hearing and singing music.

In the winter of 1959, Ricky received a mandolin as a gift from his father, who showed him his first three chords. Soon the pair was making music together and this evolved into a Skaggs Family band, with appearances on WTCR radio in nearby Ashland, Kentucky. Highlights from this era included a 1961 band guest appearance on Ernest Tubb’s Midnight Jamboree in Nashville and solo spots by Ricky with Bill Monroe (1960), Flatt and Scruggs (1962) and his idols the Stanley Brothers (1963 and 1964).

By the middle 1960s, the British invasion had begun and even Ricky Skaggs in rural eastern Kentucky was not immune to its influence; for a time he flirted with electric guitar. But other changes were taking place. The family moved to Columbus, Ohio, where Hobert and Ricky, although underage, frequented the Astro Inn to see Earl Taylor perform. It was also during this period that Ricky began a several-year fascination with the fiddle. Probably the biggest and most long-lasting event from this period was his acceptance, at age thirteen, of Jesus Christ as his savior. In the early part of 1969, the Skaggs family moved back to eastern Kentucky. There a bevy of old-time musicians continued to inform young Ricky’s musical tastes.

A chance appearance at a 1970 talent show charted his destiny. It was there he met his musical soulmate: Keith Whitley, a young guitarist and singer who, like Ricky, was enthralled by the music of the Stanley Brothers. Keith and Ricky formed a group known as the Lonesome Mountain Boys. They secured a spot on radio station WGOH in Grayson, Kentucky. A short time later, they were discovered by Ralph Stanley when the duo was performing on stage to fill time for Stanley’s late arrival at a concert. In short order, they were making select appearances with Stanley and, upon graduation from high school in the spring of 1971, signed on full-time.

In their first year with Stanley, Keith and Ricky participated in several recording sessions, including the landmark album Cry From the Cross. Reviewer Walt Saunders noted in Bluegrass Unlimited, “Anyone who has seen these kids performing with Ralph knows what hair-raising sounds they are capable of, especially on the older Stanley songs.” The duo, along with their fathers, helped to construct the stage at Ralph’s annual Memorial Day bluegrass festival. The pair also recorded two albums of their own: Tribute to the Stanley Brothers and Second Generation Bluegrass.

After two and a half years with Ralph Stanley, Ricky relocated to the Virginia suburbs of Washington, D.C. His dalliance with a forty-hour-a-week non-musical job at Virginia Electric and Power Company was cut short when an offer came to join the Country Gentlemen on fiddle. In short order, he was in the studio with them recording an album for Vanguard. Proximity to the vibrant Washington bluegrass scene landed him numerous opportunities for session work, including the Seldom Scene’s Old Train (1974) and Tony Rice’s California Autumn (1975). He also released a solo album called That’s It (1975).

Toward the end of 1974, an offer came to join banjo player J.D. Crowe’s New South. That Lexington, Kentucky, band enjoyed steady club work, often consisting of four sets per evening. The opportunity gave Ricky the chance to broaden his repertoire and also hone his skills as a master of ceremonies. With Crowe, Ricky participated in one of the landmark bluegrass albums of all time, the self-titled J.D. Crowe and the New South (1975). Familiarly known by its Rounder Records catalog number, “0044,” it included guitarist Tony Rice, rising Dobro star Jerry Douglas, and long-time Crowe associate Bobby Slone on bass and fiddle.

By now a veteran sideman in three top bands, Ricky was ready to make his own mark. In 1975, he collaborated with Jerry Douglas, banjoist Terry Baucom, and guitarist/lead singer Wes Golding to form the contemporary bluegrass band Boone Creek. They released two albums: Boone Creek (1977) and One Way Track (1978).

In 1979, Emmylou Harris sought Ricky as a replacement for departing Rodney Crowell in her Hot Band. With Harris, Ricky gained working knowledge of a band with electric instruments. Straightaway, he was in the studio for her album Blue Kentucky Girl (1979). Subsequent projects included two acoustic/bluegrass-inflected albums: Light of the Stable (1979) and Roses in the Snow (1980). Ricky was responsible for adding several Stanley songs to Emmylou’s repertoire, notably “The Darkest Hour Is Just before Dawn.”

While working in the Hot Band, Ricky released a solo project on the Sugar Hill label: Sweet Temptation (1979). A fusion of traditional country music with tinges of bluegrass, it attracted the attention of several Nashville producers and landed Skaggs a spot at Epic Records. Coupled with a year of maternity leave for Emmylou Harris, this opportunity led to the launch of Ricky’s solo country career.

A string of singles and albums for Epic shot up the charts at the height of country’s neotraditional movement, a radical departure from the pop-inflected styles of the late 1970s. The albums Waiting For the Sun to Shine (1981), Highways and Heartaches (1982), and Don’t Cheat in Our Home Town (1983) contained chart-topping singles and enjoyed sales in the hundreds of thousands. Four of Ricky Skaggs’ #1 singles came from bluegrass sources: “Crying My Heart Out Over You” (Flatt and Scruggs), “I Wouldn’t Change You If I Could” (Jim Eanes), “Don’t Cheat in Our Home Town” (Stanley Brothers), and “Uncle Pen” (Bill Monroe).

With massive airplay and status as a concert headliner, Ricky received numerous awards and accolades. These included, from the Country Music Association: Horizon Award and Male Vocalist of the Year (1982), Instrumental Group of the Year (1982, 1983, 1985), and Entertainer of the Year (1985). Veteran producer Chet Atkins was said to have credited Ricky with single-handedly saving country music.

In an effort to take more control over the production and promotion of his music, Ricky formed Skaggs Family Records in 1997. In addition to his own music, albums by Blue Highway, Cadillac Sky, the Cherryholmes, Mountain Heart, the Whites, and Del McCoury also appeared on the label. Ricky’s gospel album, Soldier of the Cross (1999) garnered a Grammy for Best Southern, Country or Bluegrass Gospel Album. In all, Ricky has received 15 Grammys and 29 nominations.

A recent career highlight was Ricky’s acquisition of the Gibson Lloyd Loar F-5 mandolin that was once owned by Pee Wee Lambert, the high harmony singer who helped to create the early Stanley Brothers sound. In a sense, Ricky’s music has come full circle. His 1996 deathbed promise to Bill Monroe was, “I will play this music as long as I live. Don’t worry about it. It’s in good hands.”

The BMI and ASCAP databases credit Ricky Skaggs with 30 published compositions or arrangements, including:

“I didn’t come to Nashville to sell records—I hoped I did—but it’s really the joy of the music that keeps my heart interested in it. I feel that now that I’m sixty-two years old, gray-headed, and I’m looking back at my life, this is the most fruitful time I feel like I’ve ever had. I’m judging fruit as people I’ve influenced, not accolades from man.”
Quoted by Brit Greenquist in “Ricky Skaggs: The Keeper of Bluegrass,” www.tedxnashville.com, posted November 24, 2017
“He carried the ancient sounds from God knows where. Ralph [Stanley] found it in the music of the mountains, in the hollows, in the people and in the churches. He was my hero and I was blessed to know him, love him and make music with him as a young teenager. The Scriptures tell us ‘God uses the simple things to confound the wise.’ He certainly used Ralph Stanley to bring the music of the mountains to the masses.”
Quoted in “Ricky Skaggs Reacts to the Death of His ‘Hero’ Ralph Stanley,” countryrebel.com, accessed August 18, 2018.