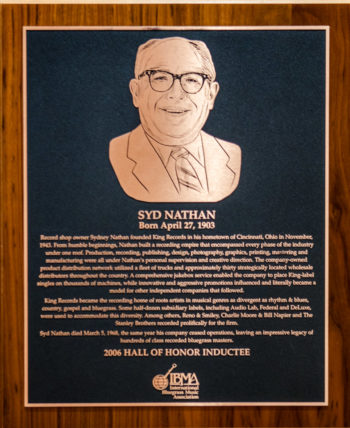 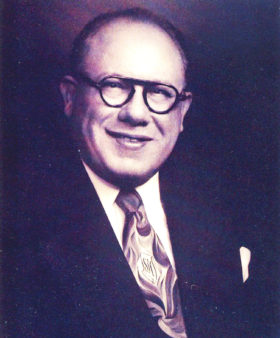 Syd Nathan is recognized as one of the true innovators in the independent record business and led one of the most influential labels – King Records – for 25 years. He scored big successes with hillbilly artists such as the Delmore Brothers, Cowboy Copas, and Grandpa Jones, and also with a host of rhythm and blues performers. His greatest claim to fame was his association with James Brown, including the groundbreaking album Live at the Apollo. To bluegrass fans, Nathan is heralded for his work in recording such seminal acts at Reno & Smiley, the Stanley Brothers, Charlie Moore & Bill Napier, and Jimmy Martin & Bob Osborne, among others.

Syd Nathan was born in Cincinnati, Ohio, in 1904. From birth, he had problems with asthma and poor eyesight – problems that would plague him throughout his life. Music was an important part of his childhood and he learned to play the drums and piano. His poor eyesight hampered his ability to keep pace with his fellow students in high school and he dropped out after the ninth grade.

Over the next 15 years, Nathan held a variety of jobs that included working in a pawn shop, jewelry sales, operating a park concession, managing a shooting gallery, bucking rivets, bussing tables at a men’s club, and promoting wrestling matches. Early entrepreneurial enterprises included a photo finishing lab and, most important to his future, a record shop. In no doubt his most successful venture to date, Nathan was quick to notice two distinct sets of buyers who frequented his shop: rural whites in search of hillbilly recordings and African-Americans who came to buy “race records,” as they were referred to at the time. These two groups remained at the core of Nathan’s marketing strategies for the remainder of his career.

Syd Nathan’s shop opened in the middle of World War II, when the shellac that was used to manufacture records was diverted to war-time use. To circumvent the supply problems he had in obtaining discs from the major labels, he decided to manufacture discs himself. He hired country music talent that was popular on local radio stations and in November of 1943, the first King records were released. Nathan didn’t like being at the mercy of other suppliers. In August of 1944, he incorporated the business, raised $25,000 in capital, purchased a building at 1540 Brewster Avenue in Cincinnati – King’s home for the next 25 years – and began acquiring equipment to manufacture his own discs. By 1946, he was manufacturing and shipping 100,000 discs per week.

In time, King Records became a fully in-house operation. King had its own recording studio, mastering facilities, record pressing machines, presses to print and fabricate album jackets. Nathan was quick to take advantage of trends that were taking place in the music industry. If he saw that a song was getting good coverage by one of his rivals, he had one of his artists record the same song and could have the new cover version available for shipping the next day.

King Records flourished during turbulent times in American history. While much of the nation had to be forced into desegregation through court orders, Nathan embraced the idea of an integrated work force. African-Americans worked alongside of whites in all aspects of the company and one of Syd’s key producers and right hand man, Henry Glover, was black. One newspaper article from 1949 noted that everyone attended company social functions, with no problems. Cincinnati, on the border between northern and southern states, was hardly a progressive city in race relations during Nathan’s era.

Nathan made several overtures to bluegrass artists in the late 1940s when he tried to hire groups such as Flatt & Scruggs and the McReynolds Brothers (Jim & Jesse). Several early King artists skirted close to bluegrass, most notably J. E. Mainer and Wade Mainer. It was not until August of 1951 that the label recorded its first unadulterated bluegrass – four songs by the duo of Jimmy Martin, Bob Osborne and the Sunny Mountain Boys. In January of 1952, the label signed another duo, Don Reno & Red Smiley. With the exception of a brief excursion to Dot Records in 1957 and 1958, Reno & Smiley’s entire recorded output was for King – about 250 songs in all. Their first hit was “I’m Using My Bible For a Roadmap” and they had chart success with other songs such as “I Know You’re Married (But I Love You Still),” “Please Remember That I Love You,” and “Love, Please Come Home.”

The other big bluegrass addition to the roster came in 1958 when the Stanley Brothers signed on board. Their first album for the label, the self-titled release, King-615, was one of the best of the Stanleys’ career. Over the next seven years, the group would record 14 albums for King. Nathan took a personal interest in a number of the sessions and sought to introduce changes that he felt would boost sales in the continuing wake of the rock ‘n roll revolution. Most notably, he sought to soften the hard bluegrass edges by dropping the mandolin, fiddle, and banjo and replacing them with the lead guitar. Purists winced but the lead guitar has been a standard element of the Stanley sound ever since. Nathan also used the Stanleys to recycle material for which he owned the publishing rights. Usually this took the form of covering old country classics from people like Cowboy Copas or the Mainers. In one instance, he had the group record a cover version of a recent rhythm and blues hit called “Finger Poppin’ Time,” an experiment that wasn’t repeated.

Nathan added several other bluegrass groups to his roster over the years: Leon Jackson , Johnny Bryant and the White Oak Mountain Boys, the Green Valley Quartet (Easter Brothers), Bill Duncan, and the team of Charlie Moore and Bill Napier. After the passing of Carter Stanley in 1966, King quickly signed Ralph Stanley as a solo artist. After the split up Reno & Smiley, Syd latched onto the new Don Reno & Bill Harrell partnership.

In addition to his poor eyesight and asthma, Nathan developed heart problems in later years. On one of his frequent trips to Miami, for some rest and relaxation, he had a fatal heart attack. The family kept the label for several months before selling it to Nathan’s friendly rival, Don Pierce of Starday Records. Since the middle 1970s, the catalog has been owned and operated by Moe Lytle of the International Marketing Group in Nashville. 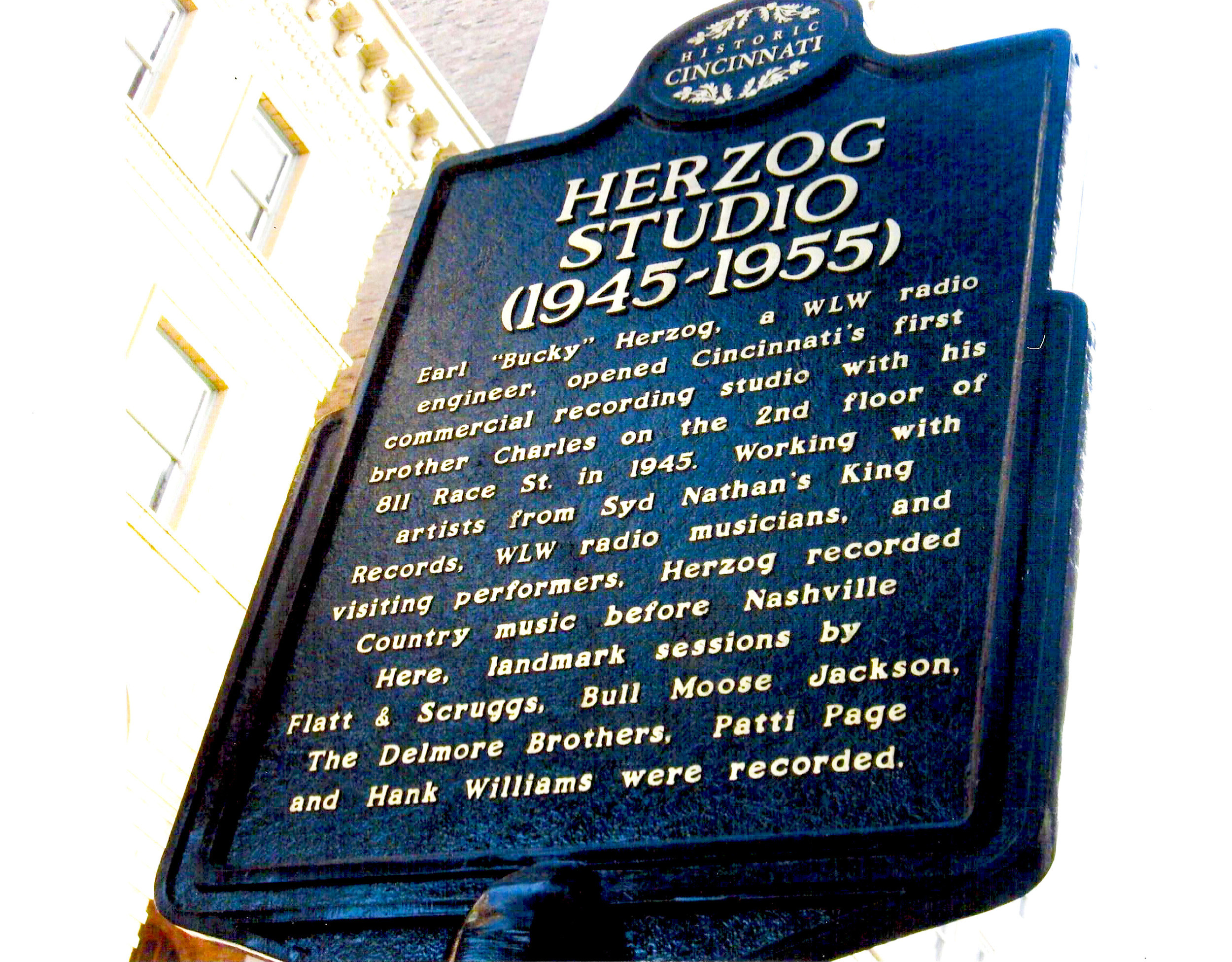 From the Archives: An historical marker in Cincinnati, Ohio. Photo by Debbie Delmore.

“Syd was gruff, crude, an eccentric and a true pioneer. He will never be given the credit he deserves.”
Shad O’Shay, a former DJ and friend of Nathan’s, quoted by Greg Evans in “The Cincinnati Sound,” Cincinnati magazine, June 1986.
“[Syd] was a pioneer. He was smart, too. Some people said he was gruff and mean, and he smoked those foul-smelling-cigars. But, I tell you this: if Syd Nathan were alive today, I’d probably still be working for him. He had insight, a special way of seeing talent in people.”
Ray Pennington, former producer at King Records, as quoted by Larry Nager in “Seymour Stein Learned the Ropes at King,” Cincinnati Enquirer, January 17, 1990.
“In many ways, he was a remarkably open-minded man. He perceived this wonderful notion of American music as not being segregated into different styles, but one big cross-ethnic whole. He did that because it was a way to make money.”
Henry Glover, former producer at King Records, as quoted by Rick Kennedy and Randy McNutt in Little Labels – Big Sound: Small Record Companies and the Rise of American Music, Indiana University Press, Bloomington, 1999.