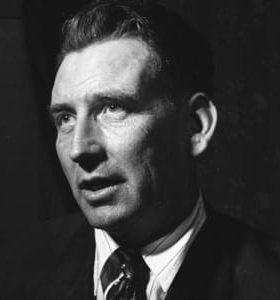 Year Inducted: 2001 Born: December 15, 1891 in Little Valley, Scott County, Virginia, United States Died: November 7, 1960 in Kingsport, Tennessee, United States Primary Involvement: Vocalist, Song Collector
“Since he never sang to any set pattern, on the trios his voice appears and vanishes with alarming regularity, often joining in on the middle of lines; apparently at recording sessions he would walk around the studio just singing whenever his excursions brought him ‘on mike.’ He suffered from palsy and a lot from sheer nerves, which could explain some of the exaggerated tremor in his voice. Remember, though, that Carter was no ordinary man, so that we should not justifiably expect him to sing like anyone else.”
John Atkins in “The Carter Family,” Stars of Country Music, 1975.

A.P. Carter was born at the foot of Clinch Mountain, where his southwestern Virginia family had lived since the late 18th century. He was the first of eight children born to a ballad-singing mother and gospel-singing father (who gave up the banjo in deference to his wife’s religious beliefs). His mother attributed his slight palsy to a near lightning strike two months before he was born. As a boy, A.P. sang in church, in a quartet with two uncles and a sister, and played a bit on the fiddle.

Around the age of 20, he traveled to Richmond, Indiana, for a railroad job. There he first tried composing songs to channel his homesickness for Virginia. Returning after a year, he tried his hand at selling fruit trees. On a sales trip to the other side of Clinch Mountain, he heard a teenaged Sara Dougherty singing and playing the autoharp. In 1915, the awkward young man somehow convinced her to marry.

The couple – who were joined by children Gladys (1919), Janette (1923), and Joe (1927) — sang together at their Maces Spring home and in local churches. Their primary sources of income included blacksmithing, carpentry, nursery sales, and logging. Sara had two younger cousins, Maybelle and Madge Addington, who enjoyed making music with her. After Maybelle married A.P.’s brother Ezra and moved to their side of the mountain, A.P. and Sara asked her to join in on guitar and vocal harmony.

Shortly after Maybelle’s arrival, A.P. learned that Victor Talking Machine Company executive Ralph Peer would be auditioning talent in nearby Bristol. The trio overcame all manner of personal, natural, and mechanical obstacles to make the trip in a borrowed auto. Peer loved the group – Sara’s singing in particular – and recorded six sides on August 1 and 2, 1927. Peer also loved A.P.’s extensive collection of unrecorded material, which he offered to publish under his new company, Southern Music, if A.P. would claim authorship. On November 4 the first of approximately 300 Carter Family records was issued.

A.P. was hard-pressed to fill the demand for fresh material. He systematically mined and re-arranged, to Carter Family style, chestnuts from the era of Victorian parlor song, sacred material from white and black traditions, American and British Isles folk ballads, the recordings of contemporary and earlier country and blues artists, pop songs, and new compositions from family and friends. The disabled African-American musician Lesley Riddle accompanied A.P. Carter on song hunting trips, where he was especially adept at remembering melodies. Riddle lived with the Carters for a time and taught his finger-picking blues guitar style to Maybelle.

The Carter Family, recorded for Victor and budget subsidiary Bluebird until 1934, then – still managed by Ralph Peer – American Record Corporation (later part of Columbia) in 1935, Decca from 1936 to 1938, Okeh in 1940, and back to Victor’s Bluebird in 1941. In 1952 and 1956, the A.P. Carter Family (A.P., Sarah, and their children Janette and Joe) recorded for Acme. None of their recording, performing, or publishing ventures were particularly lucrative except for three winters (1938-1941) spent in Del Rio, Texas, broadcasting on Mexican border stations that blanketed North America with powerful signals that circumvented the 50,000-watt U.S. limit.

When record sales fell abruptly at the onset of the Great Depression in 1929 and 1930, A.P. spent six months seeking work in the automobile industry in Detroit. Maybelle followed her husband E.J.’s railroad career to Bluefield, West Virginia, and Washington, D.C. The greatest impediment to the group’s career, however, must have been A.P. and Sara’s separation in 1933 and eventual divorce in 1939. After Sara’s move to California, the original Carter Family ended its performing life in 1943.

A.P. never remarried and spent the remainder of his life in Maces Spring. He opened a marginal grocery store; promoted small concerts by artists such as the Stanley Brothers; and occasionally pitched songbooks, pictures, and Bible pamphlets on regional radio stations. A number of the early bluegrass artists spoke of encountering him at WCYB in Bristol, where he would gladly reminisce about the glory years of the Carter Family.

A.P.’s heart weakened, and after a year of steady decline he died at the age of 70 at Holston Valley Community Hospital. He lived to see one of his arrangements, “Worried Man Blues,” make the charts in 1959 as the Kingston Trio’s “A Worried Man,” but LP reissues of the Carter Family’s recordings didn’t begin until 1961. Worldwide fame and recognition as a foundational act in folk, country, and bluegrass music followed within a decade of A.P. Carter’s little-noted passing.

A.P. Carter’s legacy lives on at the Carter Family Fold, a nonprofit performance venue established by his daughter Janette on the Maces Spring family homestead in Hiltons, Virginia. A.P.’s grocery is now a museum, packed with artifacts from the careers of three generations of musical Carters. In 2004, the cabin in which he was born 113 years earlier was moved from its inaccessible location to the complex.

Tony Russell & Richard Weize’s discography of commercially recordings by the Carter Family (In the Shadow of Clinch Mountain, Bear Family Records, 2000) credits A.P. Carter with scores of arrangements and copyright credits, including these staples:

“In A.P. [the Carter Family] had one of the greatest creative song doctors in country music history.”
Charles Wolfe in The Encyclopedia of Country Music, 1998.
“There was always a professional air to the shows themselves, with A.P. announcing each number and introducing the members of the group. Sara and Maybelle sat down to play their instruments, while A.P., always nervous, wandered around the stage… After the show they would often stay the night with friends, sometimes learning new songs if their friends were musical.”
John Atkins in “The Carter Family,” Stars of Country Music, 1975.
“In November 1953… we ended up in Richmond, Virginia, and contacted A.P. and he wrote me this letter in which he says that he was hoping we could do some work together. He had this little house up in the valley that he was aiming to give us for the winter and we could have gotten our food out of his grocery store and that he was gonna get busy and book dates for us in the spring and the summer, and that we would have plenty of work. But the fact that he thought enough of me to make that offer probably is the reason I stayed in the music.”
Bill Clifton, in Rienk Janssen, Bill Clifton: Around the World to Poor Valley, Bear Family Records, 2001.