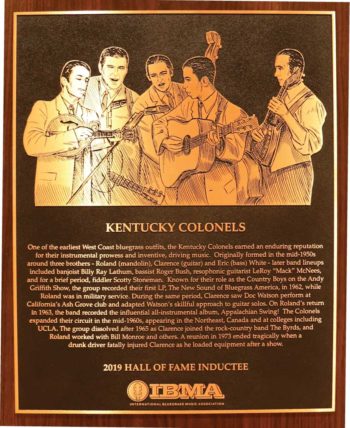 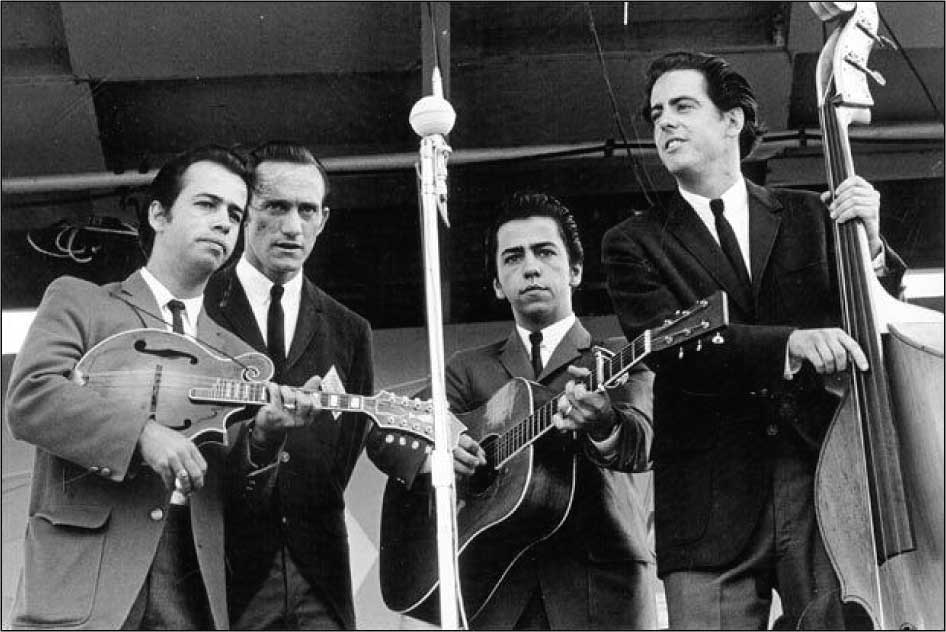 The Kentucky Colonels were known for their work introducing bluegrass music to West Coast audiences. Through network television appearances on the Andy Griffith Show and the Jerry Lewis Show they also spread the gospel of bluegrass to the nation at large. Co-founder Clarence White rates as one of the genre’s best and most inventive guitarists ever, while his brother Roland went on to enjoy high profile work with legends Bill Monroe, Lester Flatt, Country Gazette, the Nashville Bluegrass Band, and, more recently, his own Roland White Band.

The group got its start as a family band in the early 1950s. The White family resided in Maine and was of French-Canadian ancestry. The youthful group consisted of Roland and Clarence White, their brother Eric and sister JoAnne. In 1954, the family moved to California and the trio of boys acquired the moniker The Three Country Boys. As a prize for competing in a local music contest, the group won appearances on several California country music television programs.

Early on, the trio sported more of a traditional country sound but in 1955, after Roland heard Bill Monroe’s recording of “Pike County Breakdown,” the group concentrated more on bluegrass.

By 1959, the group streamlined its name to The Country Boys. In addition to brothers Roland, Clarence, and Eric, the band was augmented to include banjoist Billy Ray Lathum and Dobro player LeRoy Mack. Both Clarence and Roland White are previous inductees of the Hall of Fame and their bios appear elsewhere.

Billy Ray Lathum was an Arkansas native who spent his formative years in Michigan; it was there he learned to play banjo. Relocating to Los Angeles, he balanced work in a gas station with giving banjo lessons. It was at this time that Billy Ray met Roland and Clarence White and was soon a member of The Country Boys. As the group gelled, Billy Ray became known for his hard driving banjo and comedic additions to the band. At the time, he was one of the first banjo players to incorporate the melodic-style popularized by Bill Keith and Bobby Thompson. Billy Ray, as well as the group in general, was noted for his youthful exuberance and energetic picking. He stayed with the Kentucky Colonels until 1965, at which time he toured with Ricky Nelson. Later work included stints with the Dillards and the Laurel Canyon Ramblers. He also did studio work in Nashville, where he was living at the time of his passing in 2018.

California native LeRoy Mack McNees dabbled in guitar until meeting the White brothers in the late 1950s. They told him that if he could learn the Dobro he could join their group. He was proficient enough to appear on the band’s first recording in 1959, a 45 rpm single that featured “I’m Head Over Heels in Love” and “Kentucky Hills.” He stayed with the group, using the stage name of LeRoy Mack, until 1964 at which time he went to work for his father. In 1966, he formed the Born Again Bluegrass Band, which stayed together for 31 years and recorded 12 albums. From 2004 to 2014, he and his wife toured the country as a duet while also volunteering for Habitat for Humanity and SOWERS (Servants on Wheels Ever Ready). In 2016, he assembled another group, LeRoy Mack McNees and Gloryland. Over the years, his studio session work included recordings with Vince Gill, John Denver, and the Laurel Canyon Ramblers; the Nashville Bluegrass Band appeared on his solo album LeRoy Mack and the Friends of the Kentucky Colonels.

By 1960, The Country Boys were making regular appearances at The Ash Grove, a folk music coffee house in Los Angeles. Early in their engagement, the band was invited to make guest appearances on The Andy Griffith Show. They were featured in the Season One, Episode 19, program called “Mayberry on Record” and Season One, Episode 29, called “Quiet Sam.” Both shows aired in 1961. Later that year, the group assisted in the recording of an album on Capitol Records called Themes and Laughs from the Andy Griffith Show.

In 1961, Eric White married and left the band. His replacement, Roger Bush, was a 21-year-old California native who had played with the Green Mountain Boys, a band he helped form after graduating from high school. Bush stayed with The Country Boys/Kentucky Colonels until the latter part of 1965, at which time he and Clarence White joined a country band called Trio. In 1969 he joined the Doug Dillard Experience and from 1971 thru 1977 was part of Country Gazette. As a studio musician in the 1970s, he appeared on albums by Arlo Guthrie, Gene Parsons, Alan Munde, Rick Nelson, Leslie Keith, Sam Bush, and others.

In September 1962, the group went into the studio to record their first long-play album. Absent from the session was Roland White, who was away for a two-year hitch in the Army. The album, The New Sound of Bluegrass America, was produced with assistance from Carter and Ralph Stanley, who had just completed a three-week stand at the Ash Grove. Executive producers Joe Maphis, Merle Travis, Tex Ritter, and Johnny Bond suggested that the group change its name so as not to conflict with several other groups using the same name. Thus came the name Kentucky Colonels. Significantly, LeRoy McNees composed eleven of the fourteen songs on the album.

Clarence White’s solo guitar work was showcased on three tracks from the album: “I Might Take You Back Again,” “420 Special,” and “Won’t You Call Me Darling.” A heavier concentration of Clarence’s guitar work came in 1964 when The Kentucky Colonels recorded the twelve-tune collection Appalachian Swing for World Pacific. By now, Roland had returned from military service. The album also documented the brief addition of fiddler Bobby Slone to the group.

With the exposure afforded by the album releases, The Kentucky Colonels branched out to make several East Coast engagements: at Gerde’s Folk City in New York, the Newport Folk Festival, and Club 47 in Cambridge, Massachusetts. Closer to home was the UCLA Folk Festival and regular performances in California at the Ash Grove. Following Slone’s short stay, fiery fiddler Scott Stoneman was added for several months.

Clarence White went on to do session work for a variety of artists and spent several years as a member of the high-profile rock band The Byrds. Roland, as mentioned earlier, honed his bluegrass chops by working as a sideman in a number of legendary bands. In 1973, Clarence, Roland, and Eric reunited to form The New Kentucky Colonels. They recruited first Herb Pedersen and then Alan Munde to play banjo. The group enjoyed a successful tour of Europe and at least one East Coast bluegrass festival appearance. The reunion was cut tragically short after the death of Clarence White, who was struck by a drunk driver after a club date in California.

Although The Kentucky Colonels only made two studio albums, a series of reissues of live and studio recordings has helped to keep their legacy alive.

“When I think back on Clarence playing . . . Clarence always played. I think back and the only time I remember him not playing is when my Mother brought him home from the hospital just after he was born.”
Roland White in “Clarence White,” Bluegrass Guitar: Know the Players, Play the Music, 2005.
“We opened it up for bluegrass in folk clubs. Jerry Garcia was one of our groupies. He played bluegrass for a while.”
LeRoy McNees, quoted by Bill Colvard in “‘Country Boy’ Returns to Mayberry,” The Mount Airy News, September 27, 2018.
“They called us from Nashville and said they wanted us to do a bluegrass album. We cut the entire album in just one night, you know, doing live takes. We started about 7:00 one night and finished up about 8:00 the next morning.”
Billy Ray Lathum, quoted by Chris Houchens in “Billy Ray Latham: From Mayberry to Horse Cave,” The Amplifier, January 2009.